To address the irruption of emerging technologies on the battlefield, the Minister of the Armed Forces announced in 2019 the creation of a Defense Ethics Committee responsible for shedding light on the ethical issues raised by scientific and technical innovations and their potential military applications. This committee is composed of 18 members, some from the Ministry of the Armed Forces but also philosophers, doctors, historians and military personnel who reflect on the ethical issues of new technologies in the field of defense.

France is the first major military power to create a permanent forum for reflection on the ethical challenges of new technologies in the field of defense.

The ethical committee met for the first time on January 10, 2020 and issued its first advisory opinion on the topic of the "augmented soldier" in December 2020. 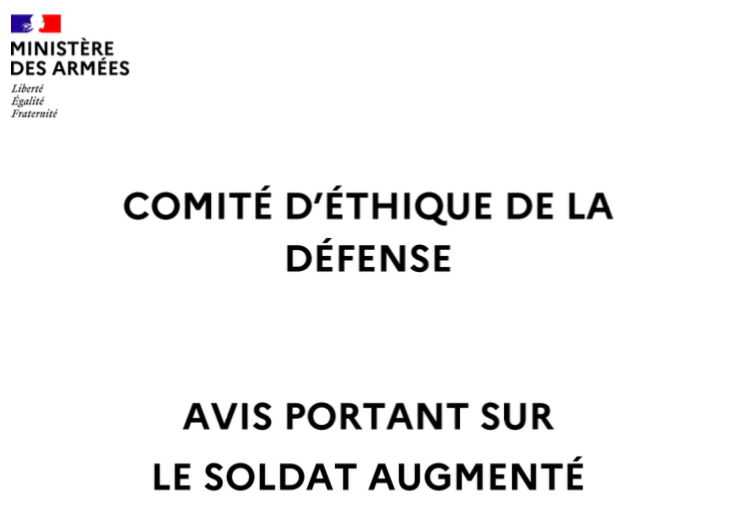 As conflicts become more and more protean today, the idea of soldiers whose physical or cognitive capacities are enhanced by technology is gaining ground. The "augmented soldier" is a soldier whose physical, perceptive and cognitive abilities are stimulated to strengthen his operational efficiency. These augmentations are becoming more and more sophisticated and are no longer limited to equipment.

"From now on, it is man’s body barrier that could be crossed to increase his physical, cognitive or psychological capacities. "

While the Defense Ethics Committee has given the green light to research on the "augmented soldier", the Minister of the Armed Forces has stressed that France is in favour, as things stand, of research on the "external" augmentation of soldiers, but against invasive augmentation which would involve genetic modifications for example.

"We are not saying ’no’ to the augmented soldier, but we are choosing the modalities: we will always look for alternatives to invasive transformations, augmentations that do not cross the body barrier. Rather than implanting a chip under the skin, we will seek to integrate it into a uniform. In short, we say yes to the Iron Man armor and no to the genetic mutation of Spiderman."

This position makes it possible to distinguish what is desirable, feasible and imaginable for the French soldiers of tomorrow, and how this fits into a geopolitical context that is not always very attentive to ethics. Moreover, the recommendations of the Defence Ethics Committee insist on the refusal of any form of augmentation that could affect the soldier his sense of humanity, that could undermine his free will and his ability to think for himself about the good and the bad. Moreover, the augmentation of the soldier must not jeopardize his civilian reintegration into society, which implies a reversible augmentation.

"Let me put an end to any fantasies at this point: these so-called "invasive" developments are not on the agenda of the French armed forces. But we have to be lucid, not everyone has the same scruples and it is a future for which we must prepare ourselves. And the opinion issued by the Defence Ethics Committee helps us to do so: by seeking ways and means to maintain our operational superiority, without denying our values and respecting our international commitments. It’s an opinion which is not set in stone and will be regularly reassessed in the light of future developments."

> Communiqué (only in French) - The Defense Ethics Committee publishes its advisory opinion on the "augmented soldier" (Ministry of the Armed Forces, December 8, 2020)

> Florence Parly’s speech (only in French), Minister of the Armed Forces - « Ethics and the augmented soldier » on the occasion of the Digital Defense Innovation Forum (December 4, 2020).

> Read the Strategic Brief published by IRSEM on this subject on February 24, 2021 (in English) :