Home > Conventional weapons > EWIPA - Explosive Weapons in Populated Areas > Commitments and practical measures to be included in a political (...)

Commitments and practical measures to be included in a political declaration

The protection of civilian populations during operations in urban areas remains a priority. In this context, France supports the objective of a political declaration that should include commitments and practical measures. Informal consultations were held in Geneva in November 2019 on this subject. 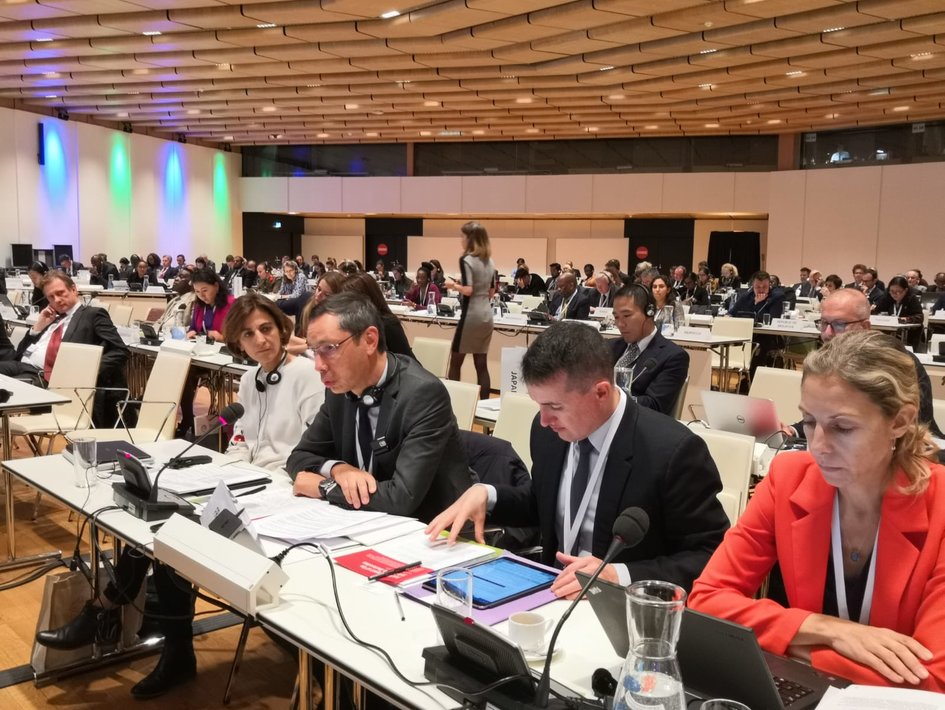 Statement by Mr. Yann Hwang, Ambassador, Permanent Representative of France to the Conference on Disarmament

First of all, I would like to thank Ireland for organising these consultations. It is a welcomed initiative in order to take into account the experience of all States and civil society.

France recognizes the concerns expressed about civilian suffering in armed conflicts in urban areas. The use of explosive weapons in densely populated areas in accordance with the principles of international humanitarian law is an important challenge in today’s conflicts.

As announced in Vienna, my country supports the goal of a political declaration. I would like to make a few remarks here as a preliminary contribution to our work.

1/ As recognized at the Vienna conference, we should reaffirm that IHL provides a sufficient legal framework for the protection of civilians. The balance that IHL seeks between military necessity and humanitarian necessity should continue to guide our reflections. The principles of precaution, distinction and proportionality guarantee the protection of civilians, as long as they are effectively respected. We should not weaken them by defining new principles that would compete with them. Our discussions should aim at promoting and improving the application of existing IHL rules.

2/ Therefore, our declaration should not seek to condemn categories of weapons regardless of how they are used; but, on the contrary, should clearly distinguish the legal uses of EWIPA from those which are indiscriminate [and I stress the word indiscriminate] and therefore violate the principles of IHL. France has used these explosive weapons in most of its recent theatres of operations (Balkans, Iraq, Afghanistan, Libya, Mali) in order to meet its strategic objectives while minimizing the impact on civilians.

3/ In this regard, my country is ready to share its best practices and the lessons it has learned from its operational experience. In our national capacity, we have prepared a document that describes the measures implemented by our armed forces to better protect civilians when conducting operations in urban areas. This document addresses several key areas:

the organization of the chain of command;

the definition of appropriate rules of engagement and the implementation of targeting procedures;

the training of the armed forces, to ensure the appropriation and proper application of the rules of IHL;

we also consider that support for victim assistance and post-conflict stabilisation is crucial, in particular to combat threats related to IEDs and ERW.

We also welcome the technical compilation produced by the United States, the paper produced by Australia, and the paper published by UNIDIR on the basis of the workshop held last September. These substantial contributions should help us to identify the best standards for the application of IHL.

However, we should bear in mind that the measures adopted to protect civilians in the context of a specific operation depend on a large number of factors. (including the operational context or mandate of the operation), and are not necessarily transposable in all circumstances.

4/ Our statement should thus take into account the complexity and challenges inherent to urban warfare. We have said it several times: we do not choose our theatres of operations. We face actors, particularly non-State actors, who knowingly seek proximity to civilians in order to use them as shields. In this regard, we should be aware that the adoption of a principle or policy that commits us to avoid any use of explosive weapons in populated areas would risk turning these areas into sanctuaries for actors who have no respect for IHL, thus perpetuating civilian suffering. Inaction also has a cost.

Finally, our statement should address the specific problem of improvised explosive devices, which are the main threat to civilians today. During the Vienna conference, it was recalled that almost half of the civilian casualties of EWIPA in Afghanistan, Syria and Iraq between 2011 and 2018 were caused by IEDs.

In conclusion, allow me to refer to the document that France has prepared, together with Germany and the United Kingdom, which sets out the key principles that we believe should be at the heart of the political declaration.