The French Minister for Europe and Foreign Affairs Mr. Jean-Yves Le Drian spoke at the Conference on Disarmament on Ferbuary 24 2020 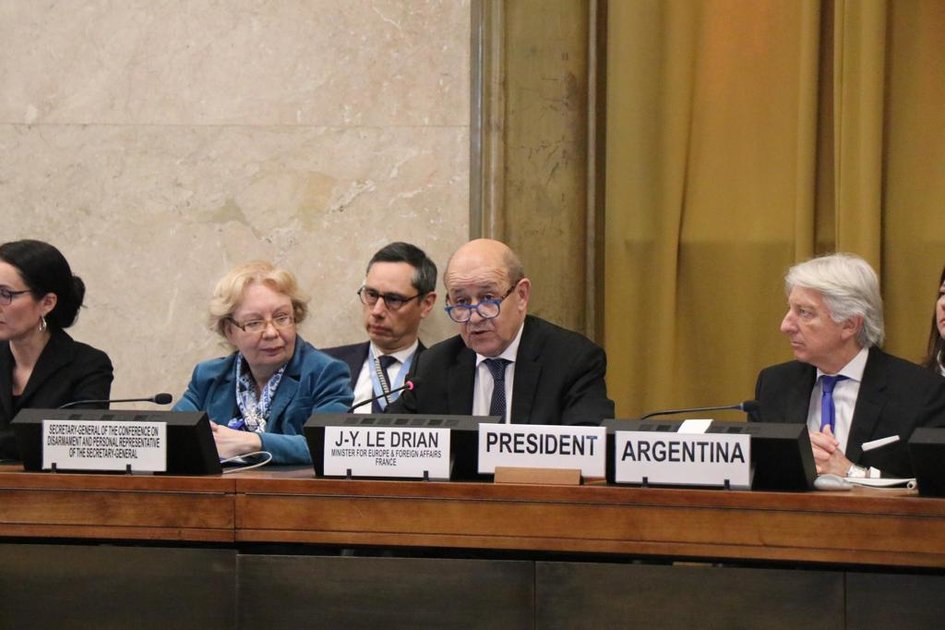 It gives me great honor to speak at the Conference on Disarmament. Because, throughout the years, the Conference has successfully issued norms and negotiated treaties that have strengthened our collective security and the stability of our strategic environment.

As I speak before you, I am fully aware of my responsibility, for, all that the Conference has built, as well as all that it stands for, are questioned today.

Questioned, firstly, by those who do not respect the instruments that we have negotiated here. I have in mind the recent, blatant violations of the Convention on Chemical weapons.

Questioned, also, by those who refuse to genuinely engage in negotiations of new norms, which would enable us to counter the return of an arms race, conventional or nuclear.

Let me take an example. It is urgent today that we collectively define the ways and means of limiting risks of accidents, deliberate action, even hostile action, in outer-space. However, on this major strategic matter that bears on our collective security, we were not yet able to agree on a pragmatic agenda, combining measures of trust and transparency, and legal negotiations.

States which have understood that it is in their interest to be able to rely on protective and stabilizing rules – this is to say the vast majority of States, actually – cannot agree to be the only ones respecting our common rules, or to satisfying themselves with these non-compliances, with these obstructions and, to be honest, satisfying themselves with this crisis of disarmament, which is one of the most concerning manifestations of the multilateral system’s crisis, of the systematization of power balances, and the intensification of international competition, which are features of our time.

For France, the Conference on disarmament remains an indispensable venue. This is why I wished to seize the opportunity to speak before you and present our idea of what responsible disarmament serving international stability could look like concretely.

And I insist on this word: “responsible”. For, one must never lose sight of this evident fact: if its end is our collective security, disarmament cannot be done without taking into account the security interests of those who effectively enforce it.

* This is particularly true of nuclear disarmament, which builds, piece by piece, on the basis of the principle of undiminished security for all.

France’s vision on this question was presented by the President of the Republic in a clear manner, in his speech on our country’s defense and deterrence strategy, given on February 7th.

It is this vision that France will defend in a few weeks, at the Review conference of the Treaty on the Non-proliferation of Nuclear Weapons.

The vision we are defending is based on three pillars:

1) Firstly, the strict compliance with the central norm that is the Non-Proliferation Treaty, which we call upon all states to enforce.

This is why we are particularly vigilant regarding risks of proliferation crises, which are existential threats to the NPT’s integrity. We continue our efforts to preserve the JCPoA and to bring Iran back to compliance with the agreement. And our efforts to reach complete, verifiable and irreversible dismantlement of North Korea’s nuclear and ballistic programs, follow the same idea.

2) The second pillar of our approach is the furthering of the normative work we are carrying out in this venue, and on which we must make urgent progress.

With the negotiation, here in this Conference, of a Fissile Material Cut-off Treaty (FMCT). You recently had the opportunity of visiting the Pierrelatte and Marcoule facilities, that we have irreversibly dismantled, and so you know that, on this topic, France believes it has shown the way.

Furthermore, with the universalization of the Comprehensive Test-Ban Treaty (CTBT); successfully negotiated within the conference as one will recall.

Third element, with new discussions regarding nuclear disarmament verification, so as to ensure that all disarmament agreement be robustly verified. This is the spirit of the second pillar of our approach towards further normative work.

3) Finally, third pillar, concrete work must be carried out for the reduction of strategic risk, and for the strengthening of trust and transparency on arsenals, doctrines, and nuclear strategies of the P5 nuclear weapon States.

I know the quality of the discussions that take place in Geneva on this topic, and I wish to commend the tireless work of UNIDIR, of which we are celebrating the 40 years of activity this year.

* We are also convinced of the importance of defining a new arms control agenda. An agenda in which France encourages its European partners to also engage.

It is indispensable. Not only to secure the existing instruments, including the extension of the New Start treaty that binds Russia and the United-States. But also to give ourselves new instruments after the collapse of the INF treaty and the Treaty on conventional armed forces in Europe.

In the field of conventional weapons precisely, important work is being carried out by the Group of Governmental Experts on Lethal Autonomous Weapons Systems. We must work towards strengthening them. Because, once the bases of an international agreement on the matter were set, concerns – unwarranted by current strategic realities – emerged. Each country must now seek to enforce the eleven principles agreed within this framework at a national level, without further ado. With Germany, we will call for specific political commitments to be made at the 2021 review conference of the Convention on certain conventional weapons (CCW).

And let me not forget the question of explosive weapons in urban conflicts. We must set a path allowing a more active exchange of good practices concerning implementation of international law when conducting our operations. This is what the political declaration currently negotiated in Geneva must aim at.

To conclude, I wish to restate France’s full support to the Conference on Disarmament, and hail the work of all the experts of the disarmament community, of whom I know the genuine and forceful commitment on these vital questions.

I thank you for your attention.