"The NPT Review Conference must be an opportunity to reaffirm our unwavering support for the preservation and strengthening of this key instrument of the non-proliferation regime, in a context where the threat posed by the proliferation of weapons of mass destruction and their means of delivery has increased in recent months." 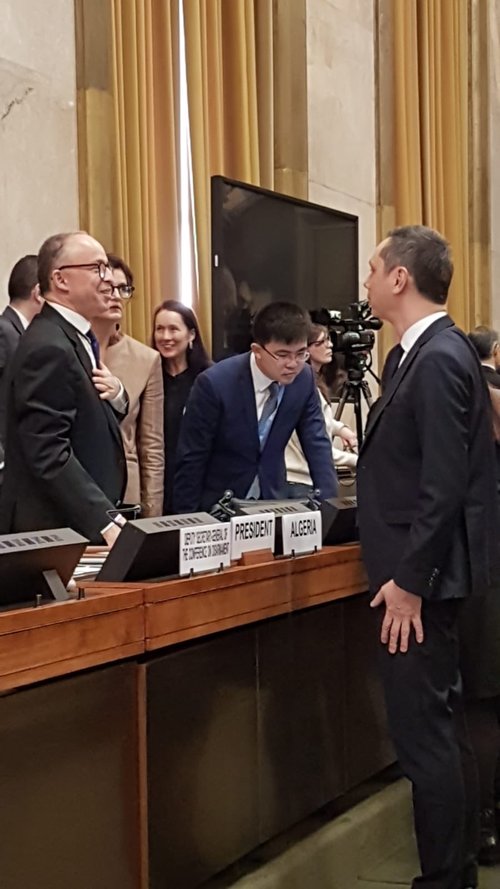 My delegation aligns itself with the EU statement, and I would like to add a few points in my national capacity.

Let me begin by congratulating you on your assumption of the presidency of this noble body and wishing you every success. You can count on France’s full support throughout your presidency and my team is at your disposal to assist you as needed.

I know that you have prepared your presidency in the best possible way, through an intensive process of consultations and by bringing together the P6 format as well as the P6+2 format. My delegation supports any initiative aimed at ensuring greater continuity and more effective governance of the Conference on Disarmament (CD) over time. The unity of the P6 will benefit the CD as a whole by leading the way to greater cooperation, and it is with great interest and all the necessary openness that we will in due course consider the joint P6 document which is to lay the foundations for the CD’s work in 2020.

France supports the efforts aimed at restoring one of the key elements of the CD’s original mandate - the negotiation of multilateral disarmament treaties.

In this regard, France actively promotes the negotiation without delay in the CD of a fissile material cut-off treaty (FMCT), on the basis of document CD 12/99 and the mandate contained therein. This is unquestionably the most mature subject for negotiations and would contribute to advancing nuclear disarmament by limiting the quantitative production of nuclear weapons. Pending the launch of negotiations, France supports the deepening of technical discussions on the modalities of an FMCT.

More generally, it is necessary for this Conference to return to a climate of trust and constructive dialogue, enabling us to move forward, while taking into account the progress and achievements made in recent years.

Indeed, this year begins in a particularly tumultuous context for international peace and security, which reminds us of the importance of fora such as the CD. It is our collective responsibility to promote these fora in order to get the most of them.

Alongside efforts on a programme of work, realism also invites us to explore practical solutions such as continuing work in subsidiary bodies. The work carried out in this framework in 2018 has led to substantial and very encouraging progress. Nothing could be further from the truth than to say that the CD is not working. The absence of negotiations does not mean that we are doing nothing. We must continue our strategic dialogue, deepen our technical discussions in order to create the conditions for the negotiation of instruments that will serve our collective security.

I will focus on a key event on our calendar for 2020 and on a major proliferation issue - the future of the JCPoA, to the preservation of which my country is deeply committed:

The NPT Review Conference must be an opportunity to reaffirm our unwavering support for the preservation and strengthening of this key instrument of the non-proliferation regime, in a context where the threat posed by the proliferation of weapons of mass destruction and their means of delivery has increased in recent months. As we prepare to commemorate the 50th anniversary of its entry into force, we should remember the contribution it has made to our collective security accross its three pillars.

With regard to Iran, given the serious proliferation consequences of the various phases of its disengagement from the agreement, and as the ministers of Germany, the United Kingdom and France announced on 14 January: “We have been left with no choice, given Iran’s actions, but to register today our concerns that Iran is not meeting its commitments under the JCPoA and to refer this matter to the Joint Commission under the Dispute Resolution Mechanism, as set out in paragraph 36 of the JCPoA.”. “We do this in good faith with the overarching objective of preserving the JCPoA and in the sincere hope of finding a way forward to resolve the impasse through constructive diplomatic dialogue, while preserving the agreement and remaining within its framework. In doing so, our 3 countries are not joining a campaign to implement maximum pressure against Iran. Our hope is to bring Iran back into full compliance with its commitments under the JCPoA.”

In conclusion, I wish you every success in your joint efforts with the forthcoming presidencies.