Statement at the Conference on Disarmament on the President of the French Republic’s speech on Defence and Deterrence Strategy (Geneva, February 21 2020) 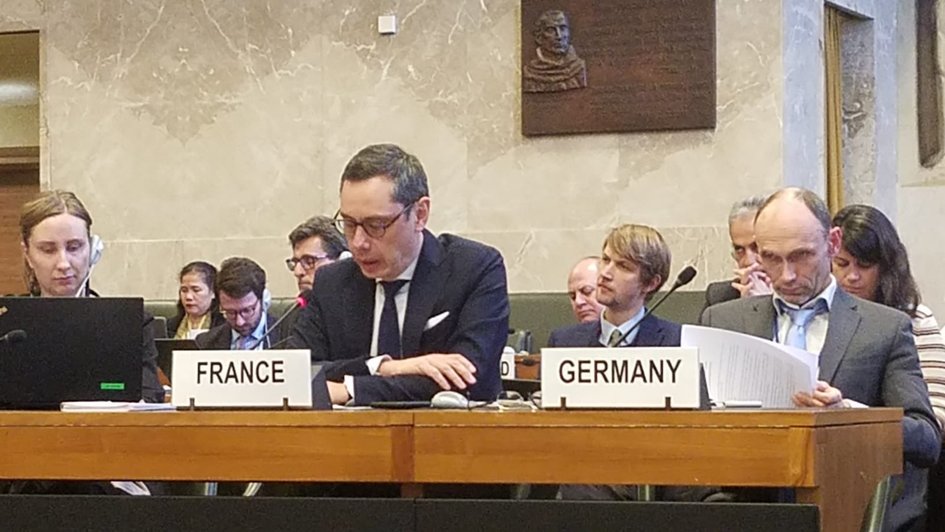 I would like to say a few words about the speech delivered on the 7th of February by the President of the French Republic in his capacity as Chief of the Armed Forces on "Defence and Deterrence Strategy". The President presented his analysis of the international security situation and his thoughts on the fundamentals of France’s defence and deterrence strategy.

With this speech, the President is aligned with the constant practice followed by French Heads of State since 1958. Indeed, under each presidential term (at least) one major public address on French deterrence is delivered. However, this speech contains an innovation: it focuses more broadly on defence strategy and places the French defence tool - including deterrence - in the context of a world that is undergoing a profound break-up, characterised by the calling into question of political, strategic and economic balances, the return of powers with decomplexed behaviour and the gradual deconstruction of the international security architecture and of multilateralism. The President’s European ambition is affirmed in a call for Europe not to be a spectator of this new strategic environment, but to regain control of its destiny. He calls for Europe to be force of proposal in the service of peace and the rebuilding of the world order, investing once again in its defence and making its voice heard on arms control.

The President of the Republic, in accordance with France’s duty of transparency as a nuclear-weapon-State, recalled France’s strategy of deterrence, which is strictly defensive, clear and predictable. The role of deterrence is confined to extreme circumstances of self-defence. Nuclear weapons must not be designed as tools of intimidation, coercion or destabilization. They must remain instruments of deterrence for the purpose of preventing war.

The President of the Republic also recalled the priorities that France defends in the area of disarmament. The roadmap for disarmament drawn up by the President includes several elements which are of particular interest to our Conference:

Respecting the NPT and preserving its primacy;

Launching negotiations in the CD on a treaty banning the production of fissile material for weapons;

Continuing the work on the verification of nuclear disarmament, which we are pursuing with Germany in particular;

Concerned about the erosion of the major arms control instruments, the President of the Republic expressed his concern about the deconstruction of the security architecture in Europe and the risk of "another conventional and even nuclear arms race on [our] soil". He therefore reiterated his wish that Europeans should together propose an international arms control agenda, work together to understand once again the dynamics of escalation and seek to prevent or avert them by means of clear and verifiable norms. Following the collapse of the INF Treaty in particular, the President of the Republic would like to see wide-ranging discussions launched, in which Europe will make its voice heard and ensure that its interests are properly taken into account, in negotiations on a new instrument capable of ensuring strategic stability on the European continent. He also reiterated France’s wish that the New Start Treaty be extended beyond 2021.

Finally, the President proposed an ethical approach to French nuclear deterrence. A democracy such as France cannot avoid reflection on this issue, which feeds into an already long-standing legal and strategic debate. But this discussion cannot avoid a lucid analysis of the strategic environment, at the risk of leading to destabilizing choices for the international security architecture. As the President said: "Disarmament cannot be an objective in itself: it should first improve international security conditions". France therefore rejects unilateral disarmament which would expose France and its partners to violence and blackmail; unilateral disarmament which, moreover, would have no knock-on effect on the other nuclear powers. The priority must be the establishment of a transparent and responsible nuclear doctrine that limits the use of nuclear weapons to the sole prevention of war. The President therefore reaffirmed the importance of the ongoing P5 dialogue on confidence-building and transparency on each other’s nuclear arsenals and strategies.

In conclusion, I would add that the President’s speech, a fortuitous coincidence in terms of timing, successfully brought to a close the "transparency" sequence organized by France, in which some of you were able to participate, consisting of the seminar presenting our NPT national implementation report and the visit to the dismantled Pierrelatte and Marcoule facilities. He thus forcefully reaffirms all our commitments under the NPT, as well as the transparency exercise we undertook on our nuclear doctrine and posture.