At the session of the Conference on Disarmament on September 8, 2020, Ambassador Yann Hwang intervened to present France’s position on emerging threats. 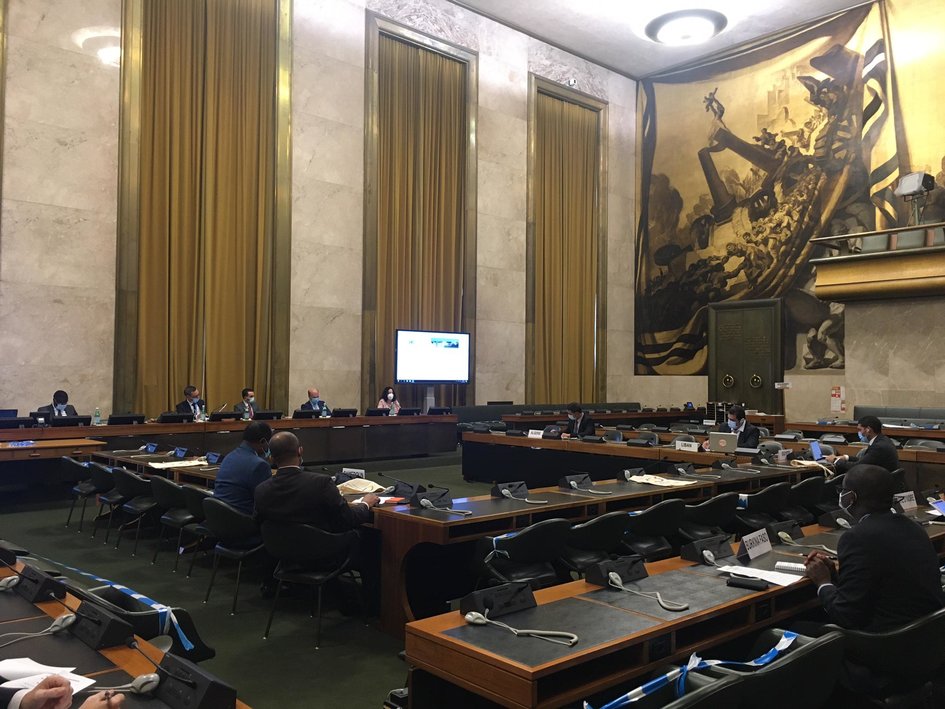 In an increasingly uncertain and unstable strategic environment, the world is facing new challenges, linked to rapid technological developments the full implications of which are yet difficult to apprehend.

Technological advances are having a profound impact on states and their armed forces, in all domains: land, sea, air, but also in cyberspace and space, which are becoming potential areas of confrontation. They also enable non-state actors to acquire capabilities previously possessed by States.

The technological breakthroughs we are witnessing are both a source of hope and concern. The opportunities they offer, both for their civilian and military applications, are often accompanied by new vulnerabilities.

Allow me, Mr. President, to review some of the emerging challenges in which the international community has a role to play.

Cyberspace is today a place of confrontation and proliferation of threats. These threats come first and foremost from the malicious or negligent behaviour of States or non-state actors, and not from the technologies themselves. The multiplication of cyber-attacks in recent years reminds us how cybersecurity is a major challenge for our governments, which must respond to it through cooperation and the rule of law.

As we affirmed in the Paris Call for Trust and Security in Cyberspace and in the Dinard Declaration on the Cyber Norm Initiative, France is committed to promoting an open, secure, stable, accessible and peaceful cyberspace. In this regard, we reaffirm that existing international law, including the Charter of the United Nations in its entirety, applies to cyberspace. It is particularly important for us to recall our commitment to international law, as well as to the full applicability of international humanitarian law (IHL) to the conduct of cyber operations in armed conflicts.

As you know, we are committed to multilateral work on cyber security. France has actively participated in the various working groups on cybersecurity initiated within the framework of the United Nations, as the successive Groups of Governmental Experts (GGE) and the first Open-ended Working Group (OEWG).

These processes have led to substantial progress. Indeed, we have collectively defined standards and principles that are now considered universal thanks to the adoption by consensus of the 2015 GGE report through a resolution of the UN General Assembly. Meanwhile, the first OEWG enabled States to agree on the urgency of responding to new threats and on the importance of implementing the 2015 standards as well as the need for capacity building.

We welcome this progress and consider that it is now time to work on a long-term, constructive, coordinated and inclusive solution that would allow us to continue our work on the implementation of standards and to develop capacity building initiatives.

The question of the regulation of weapon systems based on emerging technologies in the area of LAWS is of major importance because it covers legal, technical and operational issues. The progress made by the work of the 1980 Convention on Certain Conventional Weapons (CCW) Group of Governmental Experts (GGE) on LAWS has led to the adoption of "eleven guiding principles" in 2019. These principles form the basis for a future operational and normative framework.

The objective now is to resume work among experts within the GGE to respond to this challenge [next session: September 21-25]. In this regard, we consider that the forthcoming discussions should focus on two central elements:

We stand ready to work with all our partners and the next Chairman of the GGE, within the framework of the CCW, to deepen and clarify the guiding principles previously agreed upon and thus move towards the development of an operational and normative framework that would be robust and universal, based on these principles.

While the trial of the Charlie Hebdo and Hyper Cacher attacks of 2015 is beginning in France, the fight against terrorism remains an absolute priority for my country. In an increasingly unpredictable security context, we consider that securing materials, particularly radioactive sources, is essential.

Together with Germany, France will present a biennial resolution to the United Nations General Assembly aimed at preventing the procurement of radioactive sources by terrorists. It is important for the international community to be united on this subject and for all the actors involved to mobilize in order to strengthen the security and safety of radioactive sources.

In conclusion, in the face of these new common challenges, only a constructive, responsible and effective dialogue between States will give credibility to our common ambitions in terms of disarmament and arms control. You can be assured of France’s full commitment in this sense.