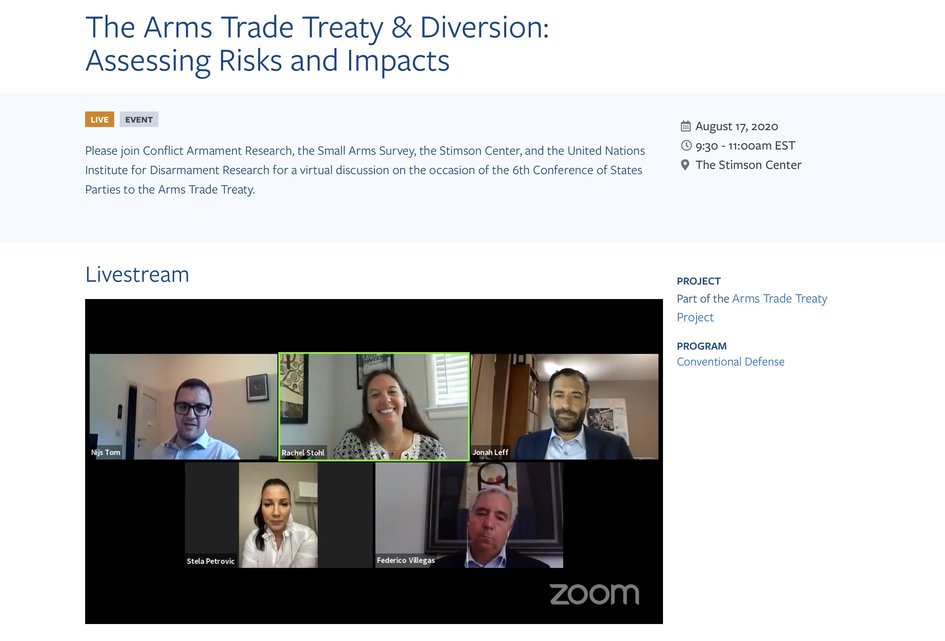 In parallel with the Sixth Conference of States Parties to the Arms Trade Treaty (ATT CSP6), a virtual discussion on arms diversion, organized by the Stimson Center in conjunction with the Small Arms Survey, Conflict Armament Research and the United Nations Institute for Disarmament Research (UNIDR), was held on Monday, 17 August. Diversion, particularly of Small Arms and Light Weapons (SALW), is a highly significant issue for international security. Indeed, diversion has many negative consequences, fuelling civil wars, terrorist activities, organized crime and contributing to numerous human rights violations. For example, 200 tons of illegal arms were seized between 2013 and 2014 in the Sahel. Diversion is therefore a mass problem. It is also a problem that concerns everyone: 142 countries were recipients of illegal flows between 2016 and 2018 according to the World Customs Organization.

Since the signing of the ATT on 2 April 2013, article 11 of which establishes that States Parties involved in the "transfer" of conventional arms "shall take measures to prevent diversion", France has constantly sought to strengthen the fight against diversion by mobilizing the international community in order to achieve better cooperation. Thus, in February 2018, together with nine other States Parties, France submitted a working paper that guides the work of the Working Group on Effective Treaty Implementation (WGETI), which now considers the issue of preventing diversion at the different stages of the « transfer chain ».

Find here the replay of the online discussion.