The informal meeting of experts on lethal autonomous weapons systems was being held in Geneva from the 13th to the 16th of May, 2014. It gathered together around 400 experts from every nationality around the mandate that had been decided by the meeting of the High Contracting Parties to the CCW last November.

For the record, the mandate was :

“The President will convene in 2014 an informal meeting of experts for 4 days, from the 13th to the 16th of May, in order to study the questions related to emerging technologies linked to autonomous weapons systems, in the context of objectives and goals of the Convention. Under its own responsibility, a report will be submitted to the High contracting parties of the 2014 CCW, which will objectively reflect the talks held”.

The meeting enabled a first international exchange on the subject of lethal autonomous weapons systems. It was presided by the Ambassador Jean-Hugues Simon-Michel, Permanent Representative of France to the Conference on Disarmament.

See the programme of the meeting

Press release of the spokesperson of the Ministry of Foreign Affairs(12th of May, 2014).

Within the framework of its constant efforts aiming at promoting disarmament, France presides in Geneva, from the 13th to the 16th of May, a meeting of experts on lethal autonomous weapons systems, also referred to as « killer robots ». The objective of this meeting is to grasp the ethical, legal and operational challenges highlighted by the development of these new technologies in the field of armament. The capability of the existing international law to frame the potential use of these weapons systems, which are not operational yet, is at the core of these challenges. The meeting will be open not only to experts or State representatives, but also to NGO, that will be able to express their views. France took the initiative, the year before, to propose a debate on this matter within the framework of the Convention on certain Conventional Weapons, necessary tool when it comes to disarmament taking into account the defence necessities as well as the humanitarian concerns.

See the opening press release of the United Nations 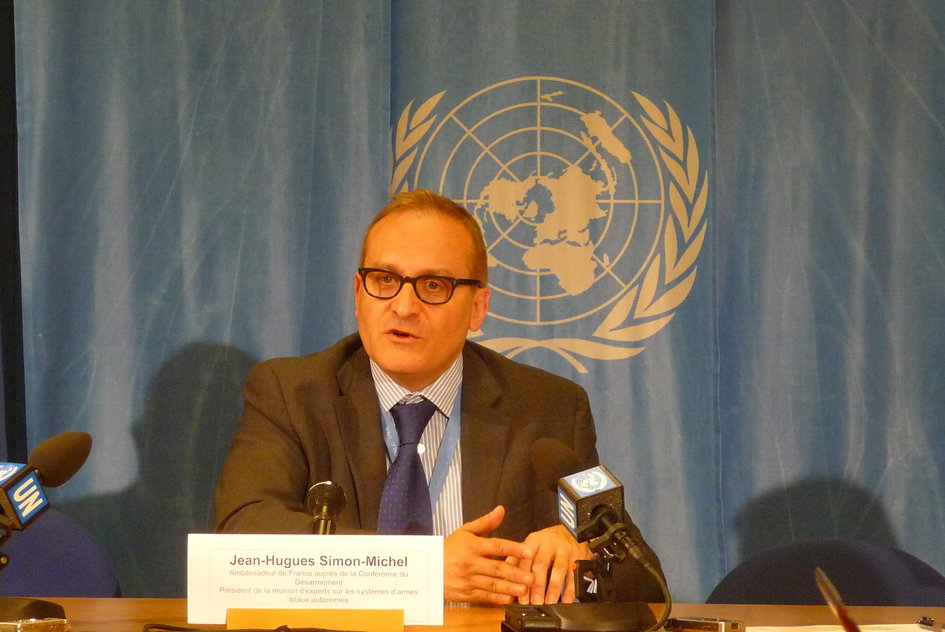 The Ambassador Jean-Hugues Simon-Michel, Permanent Representative of France to the Conference on Disarmament